My Son the Soldier

My 18-year-old is right now at Fort Gillem in Forest Park, Georgia, enlisting in the Army.

Mama is sitting at the kitchen table, drinking hot lemon water, and trying to picture her little boy in fatigues. I saw this, and it made me smile. 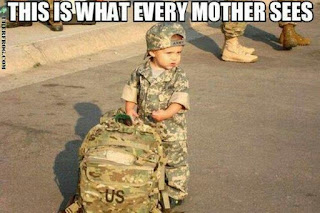 He's chosen to be an Abrams tank crew member. I suggested that perhaps a cook would be awesome. He loves food, right? And it's so saaaaaafe!

He nixed that idea.


Nooooooo im (sic) not joining the military to become a chef

There's a chance I might be able to scoot down there to see him be sworn in, but I'm sitting here with a kiddo who had surgery two days ago and is pretty miserable. So probably not. Fortunately, there's a more formal swearing in ceremony before he leaves for Basic Training in August that family can attend.

I'm proud of him for enlisting.

I know he's doing it for the right reasons. He loves his country, and wants to serve and protect it. He may make a career out of it. In fact, I'm willing to bet he will.

There's a good history of military and public service in our family. His father is a police officer. My husband, his stepdad, was in the Air Force. His grandfather, my dad, was in the Army, and Sandy may end up at the same base where he was stationed. My nephew is in the Army National Guard. He has other relatives in various branches, so this was not an unthinkable thing for him.

But I always thought he'd go to college and walk the straight and narrow path that I did.

I don't know why. We're nothing alike. Nothing up to this point in his life has followed in my footsteps, so why should he do so now?

I, first and foremost, am a girl. He's a boy. That immediately puts us on somewhat different paths.

I was a nerd. He is an athlete.

I played in the band. He fought it out on the field.

My first car was a VW Rabbit with a leaky roof. His was a Toyota 4Runner that he takes off-roading and can use to tow stuff.

But today he is taking a step that will create a chasm between us that few other things can.


If he went to college, in some ways he'd still be my boy. He could (and would) still bring dirty laundry home for me to wash, and I could go visit him and go to ballgames. I daresay that the same would happen if he had graduated from high school and gotten a job.

But by joining the Army, he taking a full-on leap into adulthood. I ain't gonna be there to do nuttin' for him. When he steps on that bus in August to take him to Basic Training, he will be a man, and all apron ties will be severed.

What kind of man will he be when he gets out of Basic? When he goes on his first deployment? Or when he gets back?

Last night when I heard about the 10 Navy crew members who were arrested by the Iranian Revolutionary Guard, my heart was in my throat. That could be my boy one day.


And that is beautiful and awful at the same time.

Posted by Marybeth Edgecomb at 5:39 AM