Scene: Last night as I was preparing dinner.


Jordan: At PAWKids today, me and Mr. Iverson wrote a new song!

Me: Who wrote a new song?

Jordan: Me and Mr. Iverson.

Jordan: (pausing) Mr. Iverson and I wrote a new song.

Jordan: Which one? That we wrote a new song or that I had good grammar?

Me: Both honey. Both.


When I was growing up, my parents would pretend not to hear me if I spoke using incorrect grammar. I carry on the family tradition. My father is an attorney, but was a journalist — both print and television — before going to law school. My mother was a high school English teacher before she quit to stay home with the kiddos. My parents write and speak well, and they expected the same of their children. 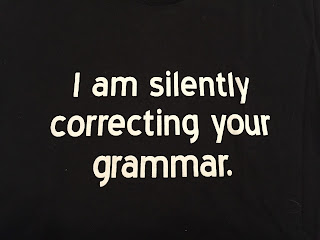 My father would frequently hand me the morning newspaper and ask me to find the grammatical error or buried lead.

[Note: I would post my grammatical pet peeve here, but I honestly have too many. I wouldn't even know where to start. I bought myself this t-shirt, which made my children laugh derisively at me. "There is nothing silent about your corrections, Mom."]

My obsession with good grammar is something that has been a thorn in my side every minute of every day since moving to Avoid. When the majority of the students in an elementary school are functionally illiterate, having good grammar is a high and lofty goal that you best set aside until they learn to ... you know ... read.

That's not to say that children (or adults) who speak with poor grammar don't write with good grammar. But there seems to be a complete disconnect between the way one speaks and the way one completes homework or answers a question on a test.  But if you are one who judges intelligence or knowledge by the way one speaks, then around here, you've got to be concerned.

Case in point: Abdul is a young man I am getting to know. He is the sweetest, most polite person with a smile that is absolutely infectious. He is a strong, if new, believer and will not hesitate to ascribe all the good things in his life to the grace of God.

You would never know he recently got out of jail.

Or that his housing situation is anything but stable.

And if you listen to him talk, you would wonder about his level of education. Everything good is "dope." He frequently hesitates trying to figure out how to say he likes something only to give up and say dope again. I'm not sure whether he has finished high school, but it wouldn't surprise me if he has not.

Or it wouldn't have until three days ago.

Abdul has started joining us for dinner on Monday nights because Herb invited him to come sing with the Big Chicken Chorus.

[Side note: The Big Chicken is a barbershop chorus. If there is a form of music that is whiter than barbershop, I haven't heard it. I cringed at the thought of Abdul walking into a room of 50 white men singing songs from decades ago and wondering how to escape. But to my utter shock he is having a blast. Go Abdul!]


Over dinner on Monday, somehow we started talking about books. And this boy who had just said that my chicken taco soup was dope made a shocking revelation. He is a voracious reader.

Our eyes lit up as we discovered that we shared a passion for books. We talked about Harry Potter books and Greek mythology and he told me about books that he's read that I've never even heard of.

We both agree that you must read a book before seeing the movie because no movie ever lives up to the book. We told him that most of our books are in storage, but that he's welcome to borrow anything we have out that interests him. I told him we could go to the library to get him a card. He hasn't had one — or books of his own, from what I can tell — since he lived with his mom and stepdad before his incarceration.

When he left our house on Monday he had a few of our books in his hands, and he looked so happy.

As Herb and Abdul were walking out the door to go sing their white-man songs, he looked over his shoulder and said, "One of my favorite books is The Count of Monte Cristo. Ever heard of it?" 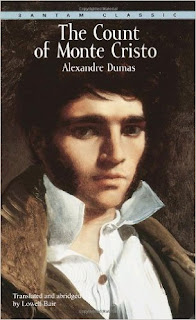 Stunned silence. But only for a second.

"Ever heard of it? I love that book! Have you seen the movie?"

"They made a movie? Naw... You sure we talkin' 'bout the same thing? The Count of Monte Cristo?"

"Yes, Abdul. Same thing. It's a good movie. And, since we've both already read the book, we can watch the movie together."

Posted by Marybeth Edgecomb at 1:22 PM