“I Will Gather My People”

I occasionally have the privilege to use my writing to tell some pretty incredible stories. This is one such story. Thank you to LaTonya Gates-Boston and her husband Carlos for letting me tell their tale of redemption and flourishing. You are doing wonderful things in Avoid, and I am grateful you have allowed me to be a part of it. To learn more about PAWKids, please visit their website or Facebook page.

The reality hit home in the middle of the night.

LaTonya Gates-Boston, Executive Director of PAWkids, was startled to find her husband Carlos was just climbing into bed at 2am that Sunday night. (Or, really, Monday morning.) Instead of getting mad at him for waking her — or being concerned that it was so late — she quietly listened to him talk about what had kept him up and out so late.

“I was up all night, just walking through the Gathering Place, thinking ‘how in the world did we do this?’” said Carlos. “This is beautiful! I just can’t believe it’s here. I mean … how is this even possible?”

This sense of wonderment came on the heels of the Grand Opening of the Gathering Place, an extension ministry of PAWkids, which officially launched on February 17.

LaTonya says she was both shocked and excited when more than 150 people came to visit the Gathering Space during its Open House. She had hoped for about 50.

Carlos was shocked, too. But also humbled to walk through the rooms and consider the hundreds of hours and thousands of dollars that PAWkids supporters have poured into this little blue house. A house that is already pouring back into the community.

“There are so many things we can do with this beautiful space,” said LaTonya. “I want to have classes here, and Bible studies, and tutoring. I even want moms and dads to be able to come and sit down and have a cup of coffee and a muffin and just hang out with each other.”

Within weeks of opening, the Gathering Place is already proving itself an asset to the Grove Park neighborhood. A parenting workshop meets around the large kitchen table twice a month, and an Atlanta doctor holds clinic hours once a month, providing free primary care to Grove Park residents. Also in the works are a family Bible study and GED classes.

Every House Has a Story

The Gathering Place has been the home of a lot of firsts already. The previous resident was named Phil and the house at 676 Hortense Place belonged to his aunt and uncle. When they moved into the house in the early 1970s, they were the first black family to live on the street. In addition, they were the first in their family to own their own home.

In 2017, when Phil realized he needed to move out of the house, he knew what he wanted to do with it.

“He didn’t want it to be sold to just anybody. He wanted us to have it,” says LaTonya. “But for what, I didn’t yet know.”

And she certainly didn’t know how they were going to pay for it. Or renovate it. Or furnish it. While the neat 1950s bungalow looked in decent shape from the outside, the inside told a different story. But like God renovates people from the inside out, He had plans to do the same in that very important house.


The first person to take an interest in LaTonya’s vision for the Gathering Place was Justin Bleeker. Justin runs Grove Park Renewal, a community-minded housing partner that invests in vacant and blighted Grove Park properties with the goal of repurposing them in ways that benefit the Grove Park neighborhood, particularly current residents. Grove Park Renewal purchased the house and sold it to PAWKids so they wouldn't need outside financing.

But that just bought the house. There was still oh, so much work to be done before anyone could gather there.

“It had active leaks in the roof, tons of mold, layers of carpet on top of one another that were rotting, there was water getting in everywhere,” said LaTonya. Phil simply hadn’t been able to keep up with needed repairs over the years, and the house’s infrastructure had suffered. Or, rather, crumbled.

But with donations from friends and and community partners, and construction help from Grove Park Renewal, slowly the house began to take shape. 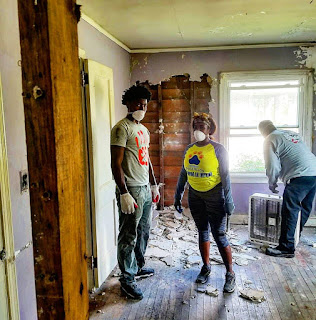 “The PAWkids kids came and helped knock down walls,” said LaTonya. “They worked hard on this house! They know the house is also for their families.”

Groups from Whitefield Academy, Atlanta Westside Church, MAP Project, and Perimeter Church invested hundreds of hours working on the house, breaking it down so they could build it back up again. Friends who heard of their furnishing needs started donating pieces for the Gathering Place. Carlos even took some of the furniture that was left behind in the house and lovingly repaired and refinished it himself.

And slowly, day by day, the house began to take shape. And then one day … it was done.

The Grand Opening came and went … and Carlos had his middle-of-the-night walk through the house. And LaTonya keeps talking about the Gathering Place. Her wheels are turning and her hands are moving as she gets more and more excited about the possibilities.

If you ask her what’s her favorite part of the house, she smiles like a kid in a candy store.

LaTonya hopes to have cooking classes so that the community can learn some simple ways to cook more healthy food, and also perhaps taste foods from other cultures.

“When you do a lot of your grocery shopping at the Family Dollar, it’s hard to know what to cook your family that’s healthy and easy and different,” said LaTonya.

“Imagine if there were Gathering Places all over Grove Park and other neighborhoods like it. Real community spaces where people can gather and grow and learn and just be together,” said LaTonya. And perhaps that’s the story of hope that PAWkids can help tell again and again.
Posted by Marybeth Edgecomb at 7:48 PM