Last night was breathtaking. And heartbreaking.

My youngest son's team played in 40 degree weather in the pouring rain to win the Bigs Championship game for his football league. The game had been postponed two days because the home fields were flooded, and there had been talk of not playing the game at all. But the players and coaches said, "No way. We'll play in a parking garage if we have to."

And they meant it.

He will age out of the league after this year, so it is terribly bittersweet to know he has taken the field for NYO for the last time. Although our time there has been short — three football seasons — it has been incredibly impactful. I actually wonder if playing multiple sports for many years there might have actually diluted the impact that these three particular seasons have had on my son and my family. I know that have fertilized my growing love of the sport of football — when played by good kids with great coaches for the love of the game.

Jordan's first season playing tackle football was while his brother Sandy was in Army Basic Training in Missouri, so he never got to see his little brother play. When the NYO Army coach heard that a Crimson Tide player had a brother serving, he made posters for Sandy and planned a photo of the two teams that we could send to him. He also got American flag stickers for our team's helmets.

The Army coach didn't have to do this. I honestly don't even know how he knew. Maybe our coach told him? Maybe he heard through the grapevine? But regardless of how it happened ... it happened ... and our family was blessed.

It was also the first season playing tackle for two of his friends from school who were  in the same age group. All were nervous about having to play against each other. Or worse ... two of them being on a team together and the third being by himself. But God orchestrated it so that all three were together on one team. The coaches didn't know who they were or what school they went to when they drafted them. Each was a complete unknown. But they played together.  And our family was blessed.

Jordan's coaches were amazing. They were tough and supportive and funny and great teachers. They had a team full of first-time players and therefore everyone assumed the team would be weak.

Coaches James, Penn, and Howard taught them fundamentals and had fun at the same time. They yelled like banshees and made fun of themselves for doing so. And they won the championship. They said that they gauge their success not by the standings, but by how many of their players want to come back and play football again the next year. Well, regardless of which metric you use — record or retention rate — they are off the charts. We would be back for another season.  And our family was blessed.

Jordan was drafted by the same coaches the next year, which was a little surprising, but tickled us to death. Jordan had a great first year, he's a big kid, and was named to the All-Star Team, so he was no longer an unknown. Other teams were eyeing him. But the coaches wanted him back, so they drafted him early. We were ecstatic. 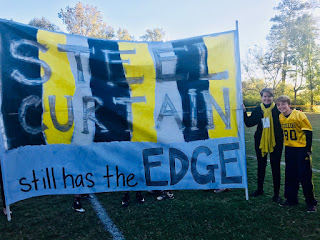 Then he broke his knuckle on Labor Day at football practice. (Just FYI ... knuckles are not strong enough to withstand being stepped on by a 6th grade boy wearing cleats. Just so ya' know.)

That was the end of his season playing, but not the end of his season. His coaches made him team captain multiple times. They let him help coach and organize practices. They even planned a surprise banner for him playing off his nickname of Edge. He came to all the games and most of the practices and he learned lessons that can only be learned by not playing.

But the boy still wanted to play. And he couldn't. This picture was captured at a playoff game and the coach sent it to me with a note saying, "Just a kid who wants to play some ball with his buddies." It's one of my favorite pictures of him because it captures his season in a beautiful — yet heartwrenching — manner.

His team lost in the semi-finals, and on some level he felt personally responsible. He cried the tears of a boy on the sidelines who wanted desperately to be in the game. They say to "leave everything on the field" — but he hadn't. Because he never even got to step on. That was a hard conversation to have with him. But our family was blessed.

Where do I start?

First, Jordan was drafted by the same coaches for the third year in a row. Unheard of. I got an email while the draft was still going on. 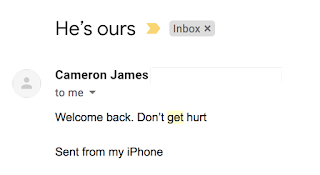 Then I realized that the son of a sorority sister of mine from college was on the same team.

And that she had cancer.

And that she would only make it to one game before she passed.

That was our only loss of the season. They played like a team that had had the shit kicked out of them — which they had. The boys were all processing hard things and asking hard questions and working through hard emotions. And honestly, they were scared. Who would be next to lose someone they love? And it's hard to do that and play football with your whole heart because football requires your whole heart, if only for 32 minutes.

There is something about playing a team sport in general — and football in particular — that pulls boys together. They let themselves feel the gut punch for a time, then they got back on the field and played.

They played in the heat.

Through a tornado warning.

They played through the one-year anniversary of the death of another player's father — the only football coach he had ever had prior to this year.

And finally, at the championship game, they played on an unfamiliar field in the cold and rain.

They played with two members of their team on the bench with injuries — right where Jordan had been the year before.
The coaches had told them the day before the game that at halftime one team was going to be cold and wet and miserable. And one team wouldn't be feeling a thing. If they wanted to be that second team, they'd better come ready to play from the first snap.

And our family was blessed.

But not because of a (second) championship. We were blessed because of the lessons that were learned on a field of grass over the course of those three seasons.
Thank you to the coaches and the coaches' wives and the teammates and the other families and the officials and the team moms and everyone at NYO who have been a village to my boy these past three years. We will miss you. But we are not leaving empty handed.

We are leaving blessed.


Posted by Marybeth Edgecomb at 10:59 AM