I Have a Void

When we decided to leave the comfortable bubble of suburbia and move into Avoid, I knew there would be naysayers. People who didn't understand or who were outright opposed.

I expected it from my mom, but it didn't come. She had concerns, but I think she's gotten used to me doing things the unconventional way.

I expected it from my dad, but instead I got encouragement and a story from his own childhood. After World War II, my dad's father had the opportunity to join the Army as an officer and move to Germany. He had special skill in local goverment and the towns there needed someone to help guide them in setting up democratic local governments. He indicated that his father turned down the opportunity because he thought it would be too much for his wife and children. That he didn't want to do anything so risky. My father, when he found out years later, was livid. "What might my life have been like," he mused, "how would I have been different if my father had taken that bold step and moved us to Germany?" He applauded our move to Avoid, and said that our family and children would never be the same.
He's so right. But in such a wrong way.


My 17yo son refused to come down here to visit us this weekend. He has been living with his father for the last year and coming to visit us on breaks and weekends — the reverse of how he spent most of his life. But everyone told me the time would come when a boy needed to be with his dad, so when it came, I wasn't surprised.

And his visits came like clockwork until we moved to Avoid. All of a sudden they became more complicated. Not because of the distance — he had a car and we paid for his gas — but because of him.

This weekend was the straw that broke the camel's back. His dad was out of town, but he was supposed to be here, so it wasn't a problem. Until he didn't come.

Even though it was his 11yo brother's birthday outing with family and friends at the Major League Lacross Championship game, he didn't come.

Even though he was supposed to take the birthday boy out to a movie on Sunday, he didn't come.

Even though he sent me a text on Thursday indicating that he was excited about the weekend, he didn't come.

Even though when I saw him at the football field at noon on Saturday he said he would be at the house by 2, he didn't come.

The last several times Sandy was supposed to come down, he didn't show. Always at the last minute, and always with an excuse.

"I have a surprise birthday party to attend that I forgot about."

"I know it's my brother's birthday ... but it's also my girlfriend's."

But what it boils down to is he doesn't like Avoid. He loves the cushy comfort of the suburbs and his friends more than he loves his family.

Never mind that he encouraged us to move.

"Mom, you should totally do this! How many people get to the end of their lives and have nothing they can point to that made a difference? You have the opportunity to help start a church from scratch. To help people. How many people can do this? You have to do this."

Never mind that when being in Avoid pushes him just a step outside his comfort zone, he comes away amazed and blessed.

"Mom, thanks for volunteering me help out at that summer camp. I had a blast. And those kids are great kids."

Never mind that there are people here he thinks are really awesome.

"Oh, we're having dinner with Bryan Tuesday? That's awesome. I love that guy."

But at the last minute, he didn't show for dinner with Bryan either.

So right now, right here in Avoid, there is a void that only a blond-haired, blue-eyed, 17yo football player can fill. And looking around, I just can't seem to find one. 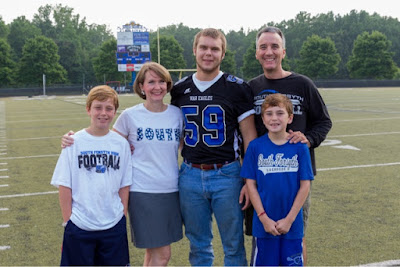 Posted by Marybeth Edgecomb at 5:05 PM