Things That Make You Go "Hmmm"

Whenever you move to a new place, you expect things to be different. You expect there to be routines or sayings or nuances of life that just aren't what you're used to.

Things are no different here in Avoid. I've had several moments that made me stop and go, "Hmmm..." because ... well ... things just didn't happen the way I'm used to.

At a neighborhood gathering, I was talking to an older gentleman about the community garden. He was going on and on about all the different things that were growing there. His favorite seemed to be the fruit trees.

Now, he had no teeth, which made it a little hard to understand him sometimes. So at first I thought I had misunderstood him when he made the following comment:

"Them plumbs be 'bout the size of yo' nipple."

And he repeated it.

It's been a couple of months now. How do you think he'd describe the plums now? Don't answer that. 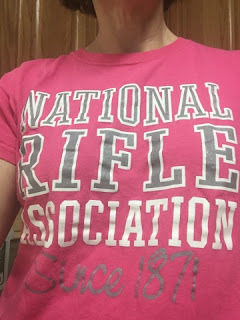 While guns may be prevalent in the hood, Midtown  and other swanky and/or crunchy parts of town are just around the corner, and that's generally where the good grocery shopping is. I've now learned that if I wear my NRA t-shirt to the Whole Foods in Poncey-Highlands, I am going to get a few sideways glances. Even if it is hot pink with silver sparkles.

We have an ice cream truck that goes though our neighborhood at least once a day. In fact, it just went by, which is what reminded me to write this.

No big deal, right? But remember ...  I live in a neighborhood where the median household income is just over $28,000. How many $3 ice creams are they selling around here? And I don't mean this to come out the wrong way, but they only take cash. No WIC or EBT payments.

Compare this to the guy who had the route that stopped at the Country Club pool in my hometown every day during Adult Swim. We were literally lined up waiting for him. A dozen or more kids in wet bathing suits standing on burning hot gravel in bare feet, clutching our dollars and quarters. That guy had the easiest job on the planet.

I wonder if down here, getting the Avoid route is kind of like fraternity pledge hazing. "Let's see what the new guy can do. Let's give him the route through Avoid."


But hang tight, folks. I haven't told you about the birthday party yet...

Posted by Marybeth Edgecomb at 10:55 AM